Carhart-Harris 2017 gave psilocybin to 20 people with severe, unipolar depression that hadn't responded to two kinds of antidepressants (thus, "treatment-resistant"). So basically, very sad people who weren't responding to things their doctors were trying.

Here's what they found: 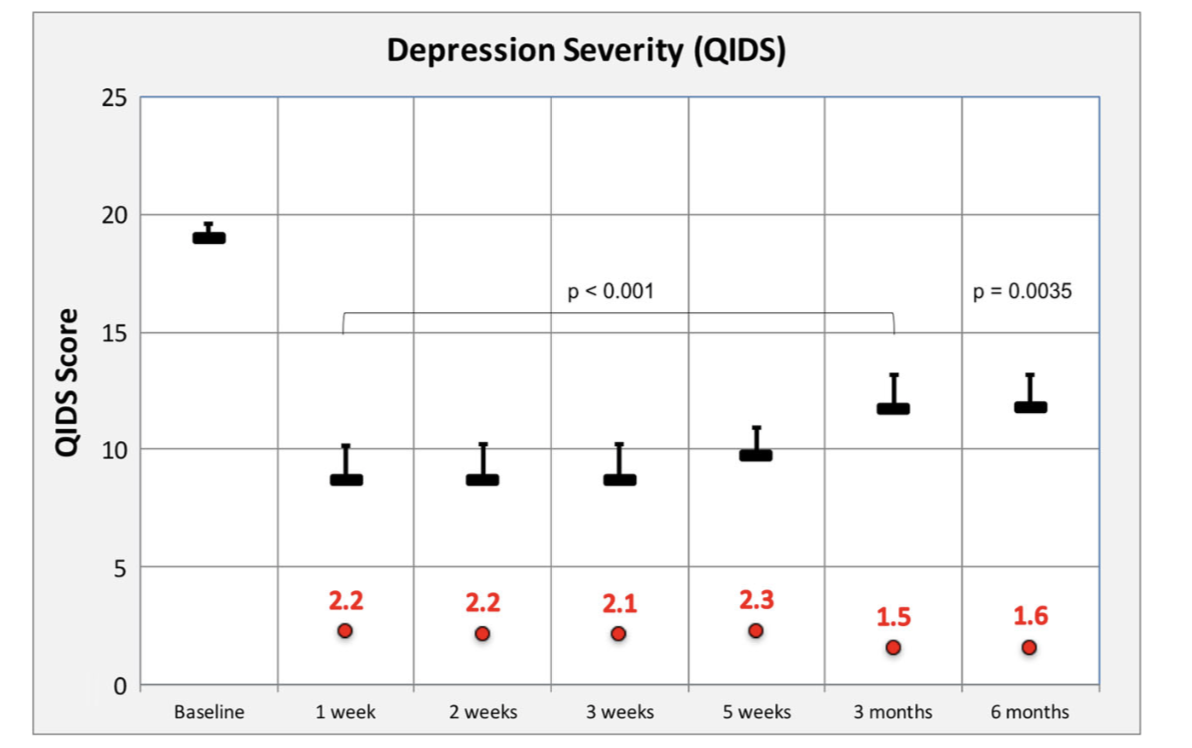 I wondered how this result was distributed – did every participant have a pretty good reduction in their depression, or did some people have a massive reduction and others have no/minimal reduction? Here's a much messy version of the graph: 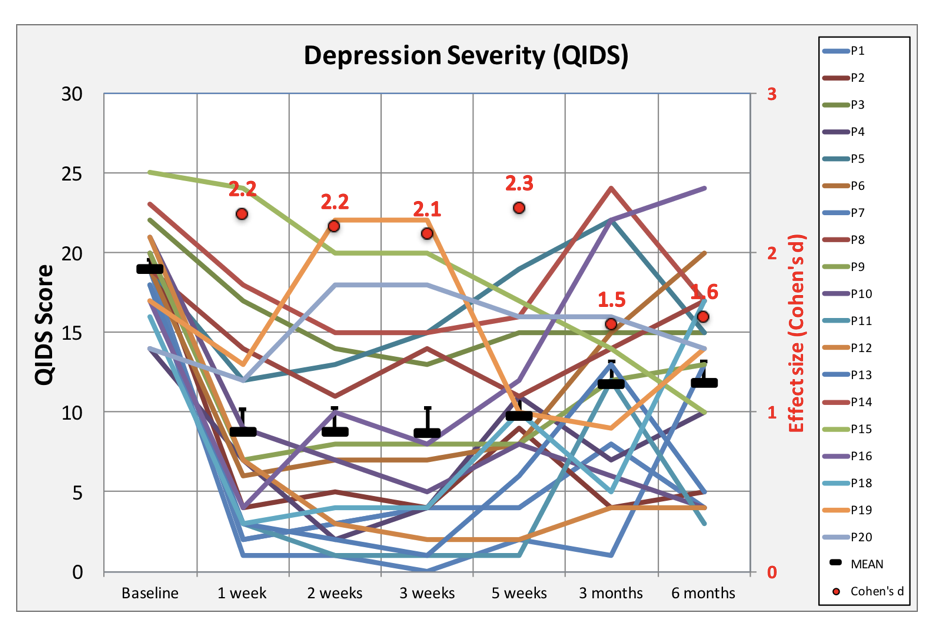 So Carhart 2017 shows that psilocybin shows promise for treatment-resistant depression.

But we're interested in behavior change in healthy-typed people, not alleviation of depression. So why are we looking at this?

Well, Erritzoe 2018 assesses personality trait change in the Carhart-Harris 2017 participants (specifically changes in Big Five (a) traits, which as far as I know is the most evidence-based categorization of personality).

... changes in personality measures after psilocybin therapy was mostly consistent with reports of personality change in relation to conventional antidepressant treatment, although the pronounced increases in Extraversion and Openness might constitute an effect more specific to psychedelic therapy.

This is interesting because changes in Big Five traits are kind of rare – personality tends to evolve over one's lifetime (a), and maybe major life events sometimes cause lasting personality change (a), but in general the Big Five seem to be basically stable for each individual (set point (a) models of personality seem to be in vogue).

So a chemical that can reproducibly cause change in Big Five traits would be pretty unique. Is psilocybin such a chemical?

Here's a chart of the Big Five for Erritzoe 2018's 19 participants, at baseline (solid line) and 3-months after psilocybin (dotted line): 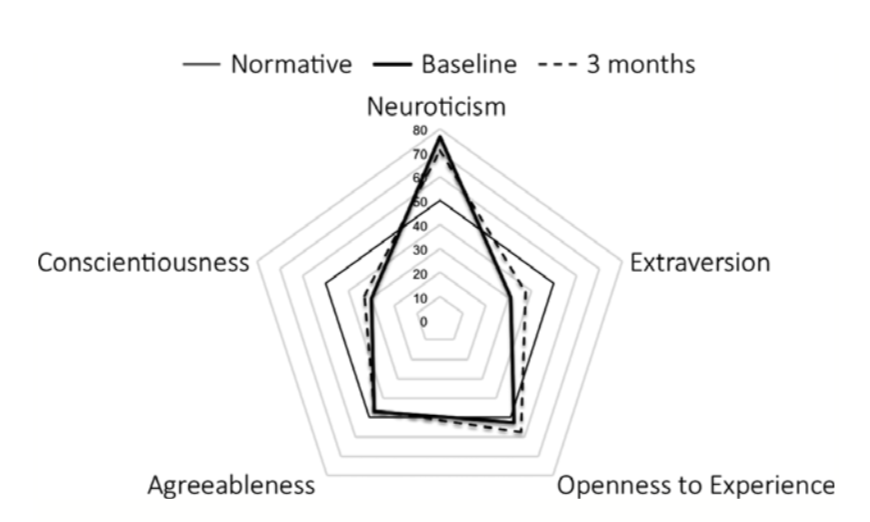 The 19 people's Big Five traits are distributed in a sharp triangle spiking towards neuroticism, probably because they're all very depressed.

So there's a change in the Big Five survey results of these people 3 months after psilocybin, and the change is in seemingly positive direction (less neurotic, more extraverted & open; yes I'm making a value judgment).

A big concern here is whether the personality change can be separated out from the reduction in depression symptoms.

Pre- to post-treatment changes in Neuroticism, a known vulnerability marker for affective disorders (44, 45), and increases in Extraversion, a trait associated with general positive affect (46), have previously been found to be significantly correlated with SSRI/SNRI-induced reduction in depression severity

Basically SSRI's for depression have also been shown to reduce Neuroticism and increase Extraversion in depressed people.

But SSRI's haven't been show to change Openness:

In contrast, increased Openness did not correlate with treatment response and neither was it different between responders and non-responders. This is consistent with the principle that Openness to Experience is orthogonal to anxiety or depression symptoms

So probably the Neuroticism and Extraversion changes just comes from participants becoming less depressed, whereas perhaps the Openness change occurs even in people who aren't depressed.

Erritzoe 2018 doesn't discuss the Conscientiousness trait change very much, probably because the change wasn't statistically significant at p < 0.05. (The other trait changes were significant.)

Why would increasing Big-Five Openness matter? Erritzoe engages with that too:

... the facets Openness to Actions and to Values significantly increased in our study. The facet Openness to Actions pertains to not being set in one’s way, and instead, being ready to try and do new things. Openness to Values is about valuing permissiveness, open-mindedness, and tolerance. These two facets therefore reflect an active approach on the part of the individual to try new ways of doing things and consider other peoples’ values and/or worldviews.

It is well established that trait Openness correlates reliably with liberal political perspective... The apparent link between Openness and a generally liberal worldview may be attributed to the notion that people who are more open to new experiences are also less personally constrained by convention and that this freedom of attitude extends into every aspect of a person’s life, including their political orientation.

From where I sit, this all looks pretty good, though there's more work to do to flesh out the connection between "increases in permissiveness, open-mindedness, tolerance, being ready to try new things, etc." to "changing how you make major life decisions."